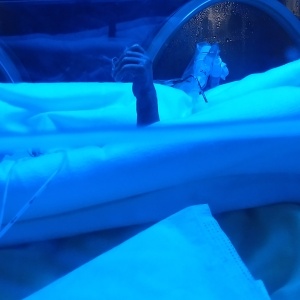 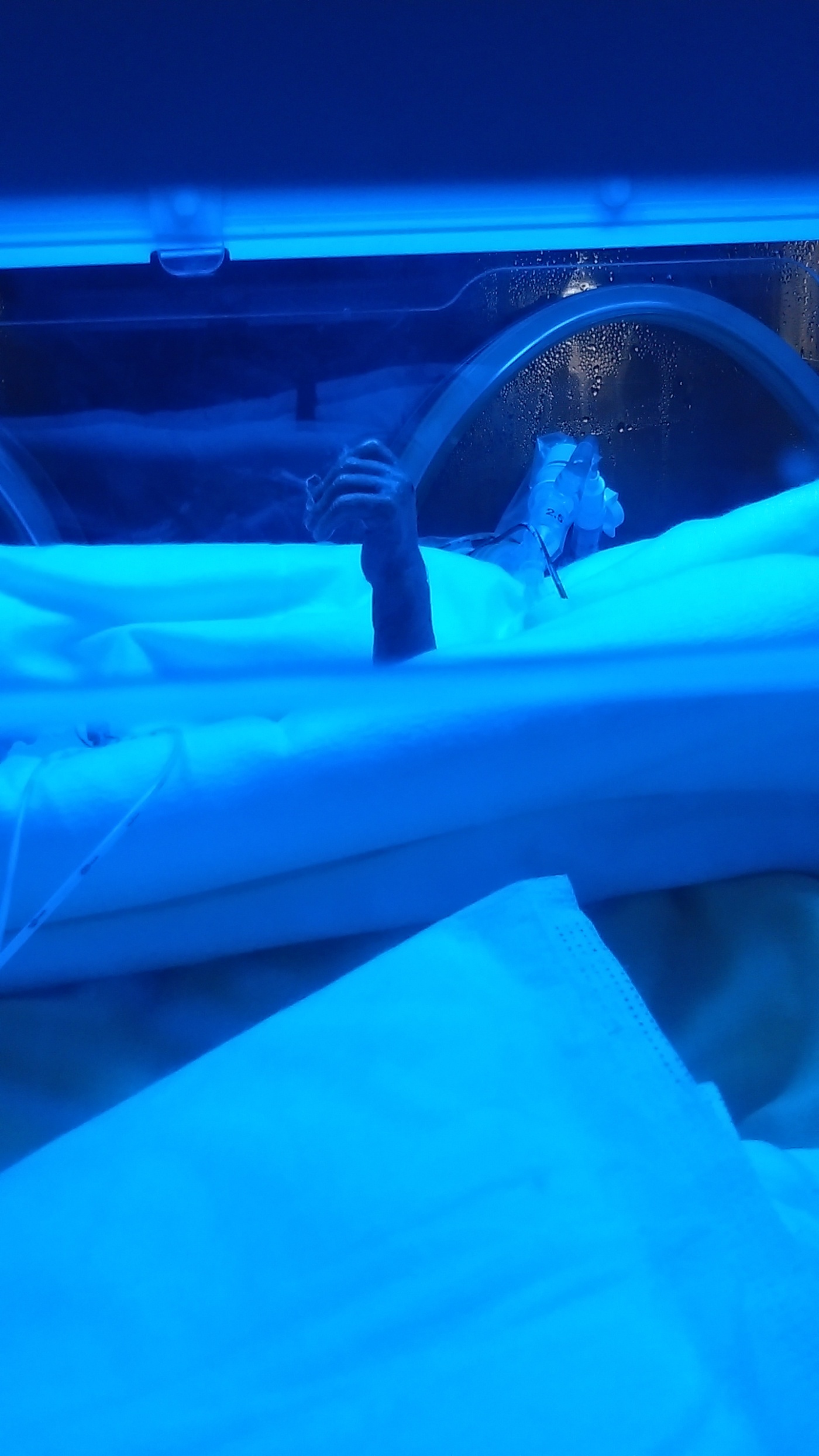 During the first week of Alec’s life, a week that we genuinely didn’t know if he’d make it to the end of, I kept saying, “I just want to…”, “I’d like to be able to…”, thinking of all the things that, should he not make it, I wanted to experience with him. As I was speaking like this quite often, we decided to write a few things down, and tick off and date them as they happened. Some were very short term, others very far away in the distance. It was important to us that the majority weren’t medical – we’d let the doctors and nurses deal with those. These were things for us and our family and things that were “normal” for being a parent. 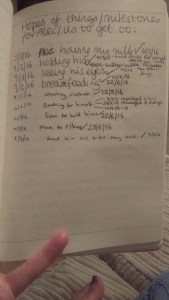 Here I’m going to reflect on reaching these milestones, using our diary entries (we journalled every day of our 157 days in hospital) and thoughts on it now. All the milestones were written down between 5th and 12th March and I’ve dated here when they were achieved.

The reality of the expressing journey on the NICU is probably another entire post but very soon after arriving in Addenbrooke’s I was encouraged to start expressing milk – with my older son Evan I struggled to produce any milk in the early days so with the added traumatic circumstances this time, and the early arrival, I didn’t really expect to get anything. Alec wasn’t able to start feeds initially but I was desperate for him to have at least some of my milk, as it would mean that I’d played a part in feeding him. “Susannah said, “I really want him to get to having my milk.” When we got back to Alec his nurse Emily said Susannah was able to feed him her milk through a tube.” 6/3/16 (1 day old). Alec’s first feed was something like 0.6ml, a tiny amount for a tiny boy. I was so thrilled that we were already able to tick off a milestone – it meant that despite peering through a plastic box to look at my son, unable to touch or comfort him, l was the one feeding him – I was able to fulfil something of my role as his mummy.

“I was able to hold him whilst they changed his bed – made me realise how small, he just nestled in my two hands, seemed quite chilled out with me.” 14/3/16  At 9 days old. We’d barely touched him – his dislike of handling along with inability to regulate temperature, added to the big tubes breathing for him, cuddling wasn’t an option. As I lifted his tiny body out of the incubator for a bed change (literally 2 minutes) I was fairly shocked at how little he weighed. I’d been petrified that I would never have a cuddle like this, a choice to hold him. 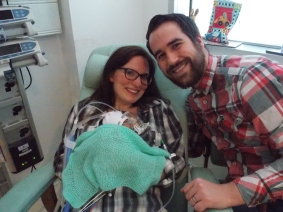 Five traumatic weeks later, I’d gone home overnight in the midst of problems with Alec’s long nutrition line, believed to be the source of an infection; the doctors had removed the line and were now needing to put a new one in, a complicated fiddly procedure, involving a lot of handling and stress for Alec. Sam phoned me and said that at the doctors’ rounds, the consultant William had decided that the aim of the weekend was for mummy to have her first cuddle and they’d deal with the line tomorrow. I hurried back to Addenbrooke’s that afternoon, where, at 6 weeks old: “I got my first cuddle! Skin to skin for 2 hours, very precious, another big milestone!” 16/4/16

Two days later, the line still wasn’t in but the nurses were keen for daddy too to have that first cuddle with his tiny boy: “Our nurse though to our surprise offered me a hold. Holding Alec was amazing, a moment at points we didn’t think we’d get to. I kissed his head. The last time I did that was before surgery! A very special moment. He was calm and slept – no crying!” 18/4/16  44 days old, 30 weeks gestation.

When Alec was born his eyes were still fused shut because he was just so early. Soon after the birth a consultant had been  to see us suggesting that  Alec’s  gestation was possibly as little as 22 weeks – they believed this because of his eyes! He’d really had no hope for Alec and wasn’t sure if the team at Addenbrooke’s would be able to take him. So from then on we couldn’t wait for him to open his eyes! At two weeks old: “After a difficult day we came up to see him at half time in the France V England rugby match. Alec opened his right eye. It was amazing to see! Another milestone.” 19/3/16 Alec’s lungs were really very poorly in that first two weeks, very damaged, leaking, and collapsing. I was shown the X-rays by one of the consultants and started to really grasp just how sick my little boy was:“I cried on Dr Simpson. Felt very upset rest of evening, ’til we saw his little eye open!” 19/3/16

As mentioned above, breastfeeding didn’t work out how I wanted it to with Evan. This time around, when I was pregnant, I was hoping to breastfeed but equally was a bit more relaxed about it. When Alec arrived so early, I assumed it would be out of the question. He was immediately tube fed and I felt fairly satisfied that I was the one feeding him as he was having my milk. I just kept going with the expressing so that I could feed him for as long as possible, and would have a good milk supply if he was able to feed. The Speech and Language team kept coming to observe Alec, watching for behavioural cues of him being ready. Once his breathing support had been weaned down enough, we were able to try: “Time to have a try at breastfeeding – Alec latched straight away! Cried and looked around a bit to find what to do but just did it properly, no fuss/pain etc. So special.” 22/6/16 (few days before due date) This is probably one of the proudest moments of my life, both of him (he’d been expected to take longer to “learn” because of some of his issues) and of myself! 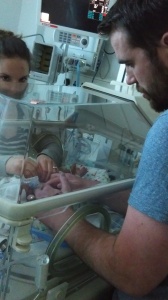 Premature babies don’t wear clothes to begin with, for a variety of reasons: they don’t make them quite small enough, doctors and nurses need easy access for observing and treating, the incubators are at a humidity level to treat the babies’ delicate skin. During Alec’s first week we bought him a tiny baby grow – in the hope he’d get to wear it one day. We knew he might not, and if he didn’t, we could keep it as a memory. A couple of months later, “I stayed into the evening, it was Felicity [a favourite nurse]. Nice chat with her… “Have you put him in clothes yet?” She took me to the linen room and we selected a few items!” 11/5/16 The next day, I was very excited to dress my baby for the first time, but I waited: “And then Sam came – when we put him back in his incubator we put a little baby grow on him!” 12/5/16 (just over 2 months old)

When Alec was first born he was ventilated – a machine was breathing for him, essentially life support. Ventilation turned out to be our biggest concern and worry the whole time he was in hospital. We were desperate for him to breathe on his own, and so were the medical staff! It took several tries:

Second time, with the use of steroids to help Alec’s lungs: “He said, “We need to be aggressive, we need to get him off at all costs. I want to do it whilst I’m on so I can take responsibility for success or failure. I say this as someone who has looked after small babies for a long time. I’ve braced myself, you need to, too.”” 28/3/16″Felicity had him overnight. I think she was literally holding him all night to calm him. Due to the high percentage of oxygen he required,  we fully expected him to be back on the ventilator.” 29/3/16 (just over 3 weeks old)

Third time, after a horrific fortnight where we almost lost Alec: “At rounds George changed his mind and decided to extubate… He said that he’d rather treat the “clinical picture than numbers”… Alec went back into CPAP at 13:45 and was quickly on oxygen around 30-40%… So proud of him, a really great day – no steroids or other support and he’d done it!” 14/4/16 (nearly 6 weeks old)

Evan was so interested in Alec from the moment he arrived. He stared at him for lengthy periods (for a 2 year old!) through a plastic box, then was gradually able to hold his hand, touch him etc. Once Alec had made enough breathing progress and was fairly stable, and we were a bit more confident in Evan: “Time for Evan to have his first cuddle – he’s ready for it and needs it and so is our Alec. I have never seen Evan so excited. Almost uncontainable, yet patient, beautifully behaved. Just a delight. Evan had a pillow on his lap and Alec lay on it. We didn’t really need to support much but hovered! He held him for half an hour, kissing him, stories, talking about the wires. Smiling and so proud. V emotional.” 22/6/16 (few days before due date). 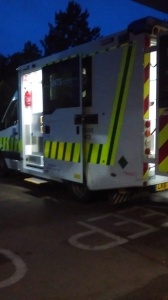 Moving back to Peterborough NICU was more than just the convenience of not having to drive on the A14 every day; it meant progress. It meant that Alec no longer needed the very intense environment of a Level 3 hospital. It meant that he was getting better. It meant that he was getting closer to coming home. For weeks we had been watching other families return to their local hospitals, thrilled for them, but really wanting to get back to Peterborough ourselves. Finally, late in the day on the day after his due date, the time came: “I decided to stay and go on the ambulance with him, even if it meant being up all night. I knew it was bonkers, but I needed to do it! Bed was confirmed, ANTS were on their way… We got in the ambulance and set off to Peterborough!” 28/6/16 (day after due date).

As Christians it was important to us to input spiritually into Alec’s life, telling him about God and Jesus, no matter how long or short that life would be. My mum gave us a little book of Bible stories- we’d been encouraged that as we read to him, he’d start to recognise our voices. We decided we wanted to complete the whole of the book. As we really didn’t know how long he’d be with us, we were reading sometimes four stories in one sitting and finished the book on 9/3/16 (4 days old).